My response, in 200 words or less, when asked why I teach…

I teach … because I care. I care about our children and their future as citizens of the world.
I want to make a difference in their lives, to connect, guide and empower them to reach for the stars. I love their enthusiasm and sense of wonder and I want to nurture their passions and help them to discover their skills and strengths.
I work in a diverse school setting and it’s not always easy. There are days when it’s hard to connect with some students. But I have found that where there is compassion, trust and a good relationship, obstacles can be overcome together.
My biggest challenge is trying to fit everything in. As much as I love teaching my students, I also love learning and sharing with others. I volunteer in the community through our state IT association and this enables me to interact with teachers around the world.
I’ve been teaching for a long time, but I’m still passionate and feel that there’s more for me to do.
So I teach, to keep making a difference.
– Tina Photakis, South Australia

Check out more teachers sharing about why they teach:
https://www.facebook.com/hashtag/iteach

On Sunday, 2 March, I was the guest co-host for #teacherwellbeingchat. Louiza Hebhardt is the wonderful moderator of this chat, which has grown into an amazing community on Twitter. I’m sharing the storify from that chat as it was focussed on ‘relationships’, a subject that is very close to my heart.
The chat was based around four questions:
1. What are some of your strategies for striking a balanced life?
2. How do you improve relationships with colleagues?
3. What do you do to optimise relationships with students?
4. What’s your hot tip for maintaining positive relationships, even when times are tough?
Ask yourself these questions and check out what other people had to say at the chat:

Today was the last day of our school year and I was busy cleaning up my room. I went outside for some fresh air and one of my ex-student came to visit. We talked outside for a while.

He was in my Greek class last year and would chat about his love of Greek Mythology and Turkish Delight (the sweet). He had also experienced some extremely hard times in his life and he was pretty philosophical about all that had happened.He acknowledged that he had an anger management issue based on his past which he never wanted to talk about as he didn’t trust many adults, but he trusted me. His love of family was heartfelt. He also promised that he would visit as he felt at home at our school.

I hoped that he was okay at high school and that he would find a mentor to help him through the hard times. He thanked me for being there for him during the year and I thanked him for listening and for taking my advice onboard. He was one of those kids that just needed someone to listen to him and to know that they cared.

Today he had just completed his first year at high school and I asked him how he fared. He answered that it was ok but he was a little fish in the big sea. He was happy that he could talk to the school counsellor. He also made some interesting observations about school. His take was that if schools were there to help kids then why didn’t they allow creativity. I asked what he meant and he said, “We are the future but schools are in the past, they don’t hear us that we need to create, to be ourselves. Why do we all have to be excellent only at Maths and English? I can do those subjects but there is more to me than that. I love drama and watching media and acting. I did really well and never got upset in that class. I could express myself. You let us create in your Greek lessons and we were able to be ourselves. That was important to me. You also listened and we could trust you.”

He was affirming that relationships are important to learning and I am so glad that I believe strongly in relationship building with my students. He was sincere about relationships being very important to him and to his successful learning. He thanked me for listening to him yet again and for believing in him. I told him that I would always be there for him and that I was proud of him for his mature outlook on life. He was quite emotional when he said that it meant a lot to him. We said our goodbyes and he promised to keep in touch.

As I started working on clearing my room again, I thought about this fine young man and how he was embracing his life experiences. He could have taken a very different road but I am so glad that he didn’t. I felt honoured to have played a small role in his school life and his simple thank you from the heart was the gift that helped to end my year on a positive note. As I said on Twitter – J, you matter! 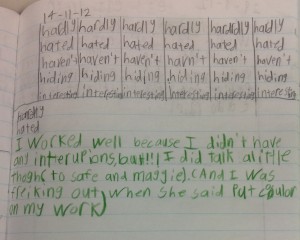 During our English lesson on Wednesday,14 November, the kids were working on their literacy activities. I had been thinking about what George Couros had said about ourselves as learners and about reflecting. Our days are so jam packed with everything we need to cover that we can lose sight of connecting with the kids on a personal level. We need to make time to actually stop and ask ‘How did you do today?’ and then stop to listen.

I was observing the class and wondering how they were doing. On the outside it looked and sounded like they were all on task and working independently but with 27 in the class I wasn’t sure. I normally move through the room helping and touching base with the kids but as I had two colleagues supporting me in the class I decided to try something a little different.

I asked all the kids to stop using a lead pencil and to pick up a colored pencil. The looks on some of their faces were priceless! Most did as I asked, some hesitated but waited for what was to come next. I then asked them to write about how they were doing with their work and why. Again a  look of bemusement from some but a brave bunch started to write, in colour on their ‘good’ work’

I kept encouraging them that it was ok and that we were finding out more about ourselves as learners today. They got into it and one brave soul who was out of his comfort zone said ‘You’re freaking me out Tina!’ I asked him why and he replied that he doesn’t use colored pencil in his ‘good’ writing. That started the ball rolling because quite a few agreed with him and started discussing it. They agreed that in class they do use colored pencils but not for ‘good writing’. This was interesting as I hadn’t realised this before now.

My colleagues and I helped the kids with any questions and the students were then ready to share. Some of the comments were amazing and very honest. The number of kids that were really hard on themselves with comments like – I didn’t work so well because I was talking – worried me a little as I teach in a busy environment which isn’t always quiet and there are lots of opportunities to collaborate and work with others.

Another comment was ‘I worked well because I knew what I was doing.’ This came from a student who started the year needing constant reassurance from me that he was doing the right thing. He now gets on with his work trusting himself that he is doing it ok.
There were many and varied comments as some students were more comfortable with the activity than others.

We will discuss the whole experience on Monday when I am back in class and I am looking forward to hearing what the kids have to say. I will see which students are happy to have their responses filmed so that we can go back in a few weeks after doing this activity again and compare responses.

My students never cease to amaze me!

On Friday afternoon while we were packing up the classroom, I was chatting with a group of my Year 1/2 students about our day. They were saying things like “We had fun” and “We were busy” but one of my quieter students said “Tina, we need to shine a light”. I stopped for a minute to try and figure out where he was coming from but I guessed that it was related to our morning singing. I asked him what he meant and he explained that one of our class members was having a lot of difficulty with school and that we needed to help her and ‘shine a light’. I asked if this came from our song, ‘Try a little kindness’ and he replied “Yes. It says ‘don’t walk around the down and out’ and to ‘shine a light’. So we need to shine a light and then we will help her be better at school.”

I was so touched by his degree of caring and that he really took in the words of the song that we have sung many times this year. It was also affirming that he was able to share his thoughts in such an insightful way – he thought very deeply about the situation and came up with a meaningful solution – all from the words of a song!

I have always believed in the power of music and the important role that the Arts have in our curriculum. We are all unique learners and this student showed me that he was thinking outside the box and on a deep level.

I acknowledged his positive approach to someone in need and for being such a caring class member. I am now thinking through how to indeed ‘shine a light for everyone to see’. It was one of those moments that makes you stop and think, “Yes, I am making a difference and together, with my students, we can achieve amazing things!”
I love my job!